Especially in the last few years, you probably read many articles titled “rise of populism in the West”. World politics in the last 10 years, got used to seeing more radical politicians rather than central ones. When media outlets were mentioning about populism, they prefered focusing over rise of fascism and socialism. In this article, I would like to take you to roots of populism in history; to ancient Rome. Hopefully, understanding the struggle of Rome, will give us a better perspective to analyze current events.

The story of Roman Republic actually begins with a legend, which bases itself on Aeneas, cousin of famous Trojan princes Hector and Paris. He leaves Troy after the war and searchs for new lands in the west. Coming from his blood, Romulus builds a small village in the Capitol Hill, later on becoming the city of Rome.

Rome actually was ruled by the Etruscan kings, yet the Roman aristocrats were not happy from this situation. All nobles of the city united and overthrown the king with a military coup. This event became the beginning of the “Republic”. The ideology behind this republic would be hatred towards one man regimes.

Let’s get one thing straight, despite containing some democratical values, the focus was not establishing democracy, it was preserving the power in hands of aristocrats. New rulers title was “Consule”. Two consules would work together to inspect each other. They had similar authority to kings but in the end of their terms they had to answer to the aristocrat class.

This system had grown and expanded Roman Republic. In the beginnings, population was low and lands were plenty so they did not have any major problems. Though in years, bigger populations joined the republic because of conquests. With more population, living standards started to drop for people. And frustrated voices began rising.

There would be a major conflict inside Rome until the end of Republic and rise of the Empire. Two sides of this conflict was Populares (Populists) and Optimates (The elite). The more republic grows, the need for soldiers in frontlines were rising. Since most of the lands belonged to the aristocrats, people had nothing. Roman army were only recruited citizens that owned a piece of land, which caused depletion in the ranks of the army. Meanwhile more trouble were brewing inside cities. Unemployement was going strong. Aristocrats kicked peasants out of their farms to establish their slaves for work there.

Two brothers, Tiberius and Gaius Gracchius who descended from famous general Scipio Africanus would liked to put an end to all this misery. Big brother Tiberius, who also fought heroicly in third punnic war elected as a tribune of plebs. (highest rank of representation of plebs in Rome). When he returned from war, he has seen the misery of roman people. At that point he decided to push Senate to accept a series of reforms consisting of taking lands from the rich and distributing it to poor and veterans.

Almost all senators were disturbed by this offer so they started pressuring other tribunes to refuse. They did everything to end Tiberius’ political career and they partially succeed. When Tiberius returned to his people thinking he lost everything, he realized something; the power of people was behind him. He told the people that all tribunes refusing this law was prioritizing the will of the rich rather than the fate of people. Maybe this was the first populist move of history.

Senate and the elites were mad, yet they did not want to touch a tribune during his term. Because of misusing his authority, they wanted to imprison Tiberius after his term. Meanwhile Tiberius himself was already busy trying to get elected for a second term. With the public support behind his back, it was very possible for him to get reelected. He also succeed on passing the reforms he wanted.

Senators were aware of this fact and proceed for their final act. Hundreds of angry senators and their slaves walked towards Capitol Hill with clubs in their hands. They were looking for Tiberius. Tiberius was aware of whats coming to him but he could not run from his fate. The Elite murdered the man who stole lands from them. But it was too late. The law has already passed and more importantly this event became the beginning of the end for the elite. 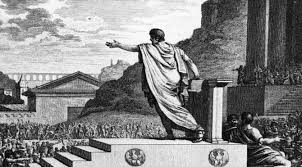 “Even the wild animals of Italy has caves to live, meanwhile our veterans are struggling in the streets with their wives and children. How is this fair?” – Tiberius Sempronius Gracchus

10 years after these events, Tiberius’ little brother Gaius also elected as a Tribune. He had similar reforms in his mind. His main idea was to cotinue his big brothers aims. But when he tried to push a law consisting of giving citizenship to non roman italians, his own supporters became hostile towards him. Elite has seen the weakness and decided to take action. When Gaius has seen a mob, he realized what was going to happen. He did not want to share the same fate as his brother and he killed himself.

Gracchi brothers actually tasted the both ends of populism. Big brother Tiberius, overestimated the strength of public support and hoped they would protect him forever. Little brother Gaius defied his very own supporters by giving “foreigners” citizenship. These major mistakes brought the brothers to their end. Yet populist ideas did not ended with them.

Roman populists grown thicker in upcoming years. More leaders defied senate in excuse of defending the rights of people.  Most important of all was famous commander and dictator for life; Gaius Julius Caesar.

Rather than reforms prioritizing the good of people, Caesar were pursuing personal interests. He went on military campaigns to cover costs of his political career and wrote books to share his glory with Roman people.

After conquering Gaul and small part of Britain, he became open enemies with the Senate. Senate ordered him to dismantle the army but he decided to march to Rome with his army. He was aiming to finish the elite who try to take the authority given to him by the people. He crossed the Rubicon river, a point of no return to finish the senate. After that point he knew Senate branded him as a traitor. That is why “crossing the Rubicon” became a term describing “passing a point of no return”. It was also a symbolic move against the elite and it succeed for that time.

Caesar’s end came with an assasination from the elite. Yet his heir, Gaius Octavian (Augustus) would fullfill populists dream and dismantle the republic, replacing it with the Roman Empire.

Meanings for our current day

On current day, there are no kind souls prioritizing the needs of people like Tiberius, or strategical genius’ like Caesar . Yet their methods are being used actively on todays politics.

After the French revolution, politics got divided as left and right. But nowadays people are suffocated between politicians claiming to defend their interests and the establishment telling them to not get mesmerized by populist beliefs.

In countries such as USA, politics get tense each day. With 2020 elections gets closer, the fight between establishment supported Democrats and Republicans claiming to have support of public rages on. Biden claims Trump will not let the seat go. But the real question stands; In this war that will define the future of world, will leaders like Trump dare “passing the Rubicon” and leaders like Biden dare to “walk towards Capitol Hill”? See you next Sunday on a new article…